Please see attached the year 1 report (2013) from the Italian Minimum Income Network. Italy remains one of the few European Union countries without a National framework for Minimum Income Schemes. However the report tells of many new initiatives to change this situation.  One of the most important of such initiatives is the one that saw the engagement of more than 170 social organisations and associations that collected more than 50,000 signatures throughout Italy, asking for the approval of the citizens’ legislative initiative for a universal guaranteed minimum income. The proposal was elaborated and promoted by the Campaign’s promoters, CILAP – EAPN Italia included, and was delivered to the President of the House of Representatives in order to be discussed in the Parliament. The report also outlines draft laws submitted by:  SEL (Left Ecology and Freedom – left); PD (Democratic Party – center-left); Movimento 5 Stelle (Movement 5 Stars – independent).  The developments and evolution of regional schemes are also highlighted.  The  Italian EMIN Network will work to try to ensure that these Spring shoots develop into fully fledged adequate Minimum Income Schemes.  Read the EMIN Italy Report 2013 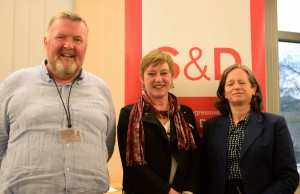 Brussels, 19 March 2014 – Yesterday, the European Minimum Income Network (EMIN) a two-year project led by the European Anti-Poverty Network (EAPN), presented its first results on how to ensure adequate minimum income schemes in all EU Member States, at an event in the European Parliament organised by MEPs, Frédéric Daerden and Pervenche Berès from the Socialists and Democrats Group.  Millions of Europeans should know that it is possible that EU Member States could cooperate, through a European Directive, to ensure the progressive realization of adequate Minimum Income Schemes in every EU country.  The EMIN project shows growing support for such a directive.

Ms Berès, who is also chair of the Parliament’s Employment and Social Affairs Committee, spoke about the possibility of an EU Directive as “an exciting development that needs to be part of the discussions in the European Election campaigns and which should be brought quickly on the agenda of the newly elected Parliament”.

“The position taken by National Governments, by Political Groups in the Parliament and National Political Parties, by the EU Institutions, to support or to block this development is information that all EU citizens should have”, added Fintan Farrell, coordinator of the EMIN project.

What are Adequate Minimum Income Schemes?

What do Adequate Minimum Income schemes bring to society?

The Year One (2013) report from the Danish Minimum Income Netwrok is now public.  In the report you find a wealth of information about developments in relation to Minimum Income Schemes in Denmark.

The Report shows that the trends are leading in one direction, away from classical Danish and Nordic social welfare based on equality and solidarity to something else. It also shows that within the population there is still a very strong attachment to the Danish Welfare model. What the ‘something else’ that is driving the changes and underpins the new ‘model’ has become a question, which is very important to answer. The aim of the study is therefore not only to describe on-going developments, but also to contribute answers to where the developments should go in the future.    Access full Report here: Danish EMIN – Year 1 Report 2013 – final

Frédéric Daerden and Pervenche Berès, Invite you to the audition, Minimum income in all Member States –  A step forward to a social Europe on 18 March, 3.30pm – 5.30pm (room PHS 1C047). First outcomes from the European Minimum Income Netwrok will be presented. For more information see EMIN Project Event in the EP 18 Mar 2014 FLYER

REGISTRATION: Please register by sending an email to fintan.farrell@eapn.eu by 13 March.  If you don’t have a badge to enter the European Parliament please include in the email your first and last name, date of birth, nationality and ID/passport number. Then on 18 March at 3.00 come to the European Parliament, Spinelli Building, entrance from the Solidarnozsc Esplanade, where you will receive your badge to enter.

Please see here a response to the EMIN draft EU road map from Prof John Veit-Wilson, a sociologist and social policy poverty researcher who has worked and written on the subject of minimum income adequacy for decades.   His contribution suggests practicable methods of achieving a better approach to adequacy allowing for national differences and constraints on implementation. Please see the full draft EU road map in a previous entry on this blog. Comments on the road map are very welcome. A second version of the road map should issue in early April.

This project which was supported by the PROGRESS programme and lead by EAPN Irl, had NGO and Governmental partners from 7 countries. It was one of the first reports to make a case for an EU Directive on Adequate Minimum Income.  See the final report of the project here

The transnational project “Standard Budgets” was also supported by PROGRESS money and aimed to develop and strengthen the instruments that are needed to (better) use Reference Budgets. Under the supervision of Nibud (Austria), national reference budgets were developed in Austria, Belgium, Bulgaria and Spain, Finland and Germany.  Information on this project can be found at www.referencebudgets.eu

EAPN Major Conference in the 2010 Year Against Poverty

As part of EAPNs campaign for adequate minimum income EAPN with EAPN Belgium held a major conference during the 2010 Year against Poverty. Starting from the experiences of people living on a minimum income, the conference engaged in a timely review of the role of minimum income in promoting a better life for all, and review the progress made, in the context of the European Year against Poverty and Social Exclusion. The aim was to press for concrete proposals which can ensure an adequate minimum income as a lasting legacy from the 2010 year. A draft framework for an EU directive on Minimum Income including the proposal of a legal base for such a directive was presented. For more info see here